The center’s custodian, Vernon, celebrated a birthday yesterday.  Upon hearing of his big day, two of the preschool classrooms eagerly offered to make birthday cards. Small groups worked together copying the words, “Happy Birthday Mr. Vernon” on their carefully decorated cards.  Soon we noticed a new project was underway.  Blythe, Eleanor J, and Charlie each began to fill the bottom half of a page with “dots” and the top half with “designs”.  They explained that they were making “laptops” for Vernon. “He works so hard to do cleaning that we want him to have another kind of work, too.”

And so, the cards and laptops were carefully gathered and packaged and left by the janitorial closet for Vernon to discover.  He didn’t see them until he was almost done with his cleaning; he said that when he saw his name scrawled on the giant envelope he thought, “What on earth is this?”

The next morning Vernon dropped by early to say thank you. 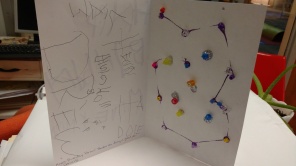 “Those cards were the icing on the cake!” he said.  As he thanked a group of children for their thoughtfulness, Drew immediately said, “I am going to make you another card today!” The act of giving unleashes children’s innate sense of charity and compassion.  By giving to others, children receive a huge boost to their own self-esteem. They realize that they can make a difference in someone’s life.  What a gift!

Calendar of Closings for 2022